Each week I will post my favorite photos of Paris and the rest of France until I am once again in the City of Lights at the end of July.

A few photos that evoke special memories of Paris 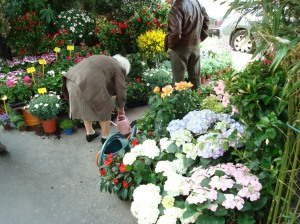 An elderly Parisian stoops to water the flowers in the Marché aux Fleurs located on the Ile de la Cité, close to Notre Dame Cathedral 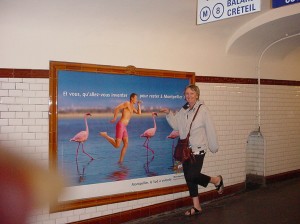 I find some Flamingo friends in the Metro

A young woman casts a critical eye on a Rodin statue in his museum. 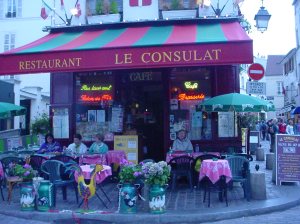 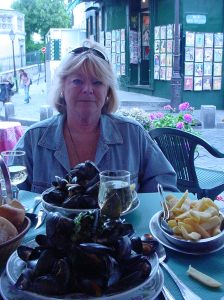 Each week I will post my favorite photos of Paris and the rest of France until I am once again in the City of Lights at the end of July.

December and a solitary ride to the top

I love Paris in the springtime 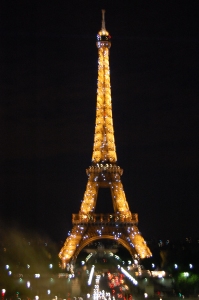 Shimmering in the evening

Getting in the mood–as if one had to work at getting excited to visit France! As I prepare for my lucky 13th trip to France this summer and a 3 week stay in Orleans with my daughter and granddaughters, I’ve … Continue reading →

Amid these troubled times, I found my spirits lifted as our family’s traditional Christmas decorations went up on the Saturday after Thanksgiving. Sharing a home this year with my daughter, son-in-law, and two little granddaughters made it a gala event. Sadly, five hours of unpacking boxes and decking the halls did little to counteract the excesses of turkey day since the leftovers were brought out midway. But out came the family collection of ornaments, each with its own particular history. And only one glass bauble hit the deck and cut one little bare toe.

Paris is remembered, unicorns displayed, and favorite handmade ornaments are unveiled once more, grouped in clusters by little helpers. 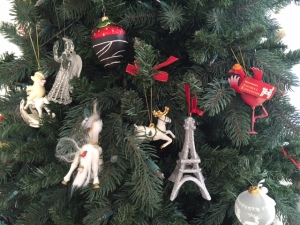 The Buddy L train with real steam coming out of its smokestack is patiently brought to life by my son-in-law and hides behind the tree out of reach of toddler hands.

The little ones help Mimi (moi!) reconstruct the Dickens Village and delight again to the miniature ice skaters gliding around the ice rink. 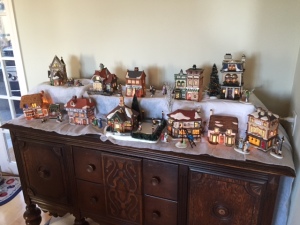 The advent calendar is hung to remind the children and adults to keep Christ at the center of Christmas, the One who can bring this world a much sought after peace. 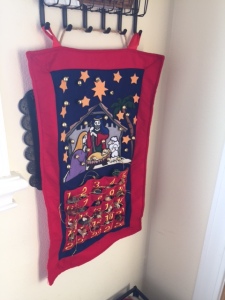 And, of course, downstairs in Mimi’s quarters, Doc Flamingo’s pink feathered friends are hung from the fronds of their very own Christmas palm tree. 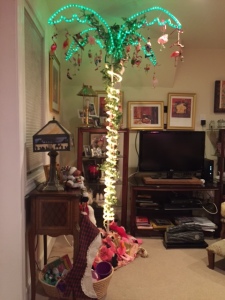 So a Merry Christmas to all from Flamingo Santa

And  Happy New Year from this fancifully feathered duo. 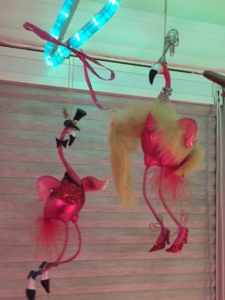 And Mimi can now take a short rest and look forward to a visit with her son, daughter-in-law and two big boy grandsons up in Oregon in 3 weeks to celebrate more family holiday traditions.

Favorite photos from my many journeys to Paris. Nothing can destroy its beauty, history and the courage of its citizens.

should we let terror steal
joy from our lives or should we
stand in solidarity and
let our fallen towers give courage to the
cafes, stadiums, and music halls of Paris

Where’s Scotty when I need him? As the days count down and I’m surrounded by packing boxes, I desperately want to be beamed up to my new home. The best way to distract myself while I’m resting on the couch with various sore muscles being chilled under ice packs is to think back to some of my lovely trips to France. And look forward to another journey to my favorite French destinations next summer.

And, you MUST scroll to the bottom of the photos to see my the abode which I will share with my daughter and her husband and my two delightful granddaughters, ages 3 and 5. I know I’ll enjoy the fabulous view of the entire San Francisco bay from my little private patio. And what better than having two little people prying your eyelids open in the morning, whispering, “Are you awake, Mimi?” 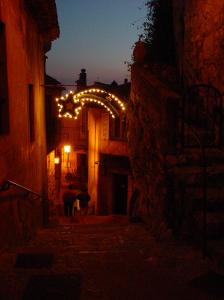 Eze during the Christmas holiday 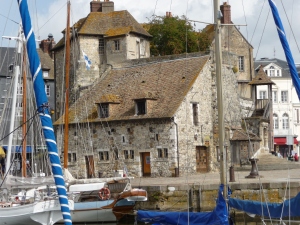 The cottage at Chenonceau at the height of the wisteria season

The harbor at Cassis–gateway to the Calanques 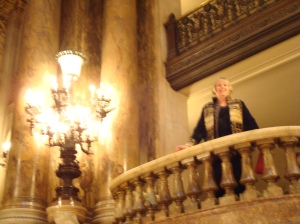 Dinner on the beach at L’Ile Rousse in Corsica 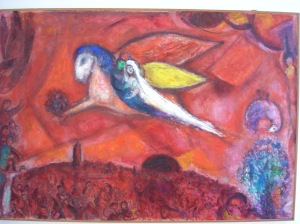 The Petite Hameau of Marie Antoinette at Verseilles

A cozy view of my new home at night. That’s my special space on the bottom right behind the wrought iron fencing. 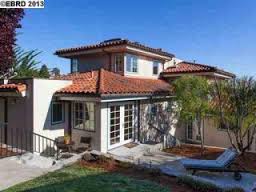 My little private patio with views of San Francisco bay

A view of San Francisco bay from the main level 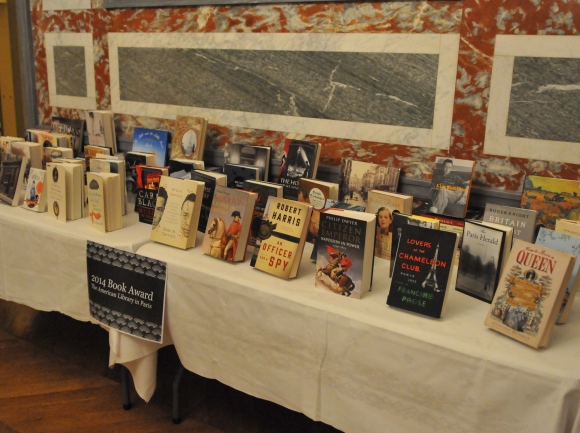 Selections from the 2014 award year

I’ve just received an unexpected and most delightful invitation to submit my novel MOTHER TONGUE for the annual American Library in Paris Book Award designed for authors of fiction or non-fiction books written originally in English about France or the French-American connection. MOTHER TONGUE follows the journey of a young American child advocate attorney with Corsican roots who flees to Paris after a personal tragedy. Serving as a lingua corsa (native Corsican tongue) translator for Liberation, she finds herself caught up in another case of a missing child and uses her secret knowledge of lingua corsa to infiltrate the Corsican separatist movement to find the child and avert another tragedy. A suspense-filled French-American connection for sure. C’est moi! Wish me luck.

The winner of the Award receives a prize of $5000.00 and she is invited to Paris, with air travel and accommodation at the Library’s expense, for an award ceremony including a public reading. All nominated authors will have their books added to the permanent collection and showcased in a special display for six weeks in the fall of 2015. They will also be invited to the award ceremony and be considered for a public reading.

From their website: The American Library in Paris has attracted and celebrated writers for all of its ninety-four years. The Library was created in part as a memorial to a young American poet, Alan Seeger, who wrote the well-known poem “I have a rendezvous with death” not long before he died in action in France in 1916. One of the Library’s founding trustees was Edith Wharton. Ernest Hemingway and Gertrude Stein, among many other writers of note, contributed reviews to the Library’s literary magazine, Ex Libris. Stephen Vincent Benet composed John Brown’s Body at the Library. And authors of every generation have worked and spoken at the Library: Ford Madox Ford, Archibald MacLeish, Colette, Henry Miller, André Gide, Anaïs Nin, James Baldwin, Irwin Shaw, James Jones, and Mary McCarthy, to name a few.

Today the Library is the pre-eminent center in Paris for evening talks by prominent authors who write in English. The Library now looks to extend its commitment to outstanding writing by awarding an annual literary prize [of $5000] under the supervision of its Writer’s Council. A generous grant from the Florence Gould Foundation has allowed us to make this idea a reality.

The collection of over 120,000 books at the American Library in Paris

The material in the Library’s collection of over 120,000 items is composed primarily of works by American and other English-language authors, and features significant holdings in American history and civilization, American literature and literary criticism, American artists, and general aspects of American culture and society. The collection is otherwise described as encyclopedic, covering all topics of knowledge.

Very often it’s not the grand vistas but the intricate details that are most remembered from our travels. Enjoy this array of exquisite bits of flotsam and jetsam from my travels in England and France.

A swan at Versailles

The “Thinker” gargoyle at Notre Dame

Chenonceau through a window

The kitchen at Chenonceau 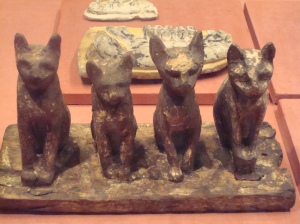 Egyptian cats at the Louvre

MIniatures of Paris in shop on Ile St. Louis 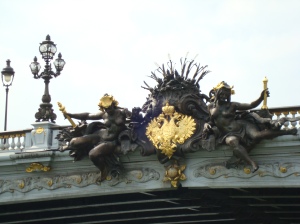 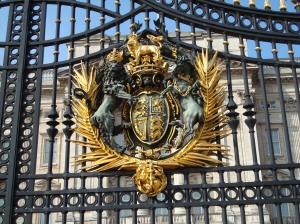 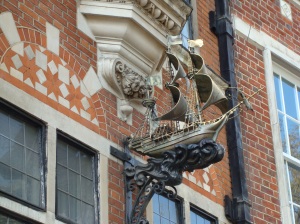 And ending on a yummy note…the Albert Pub in London. See you there!