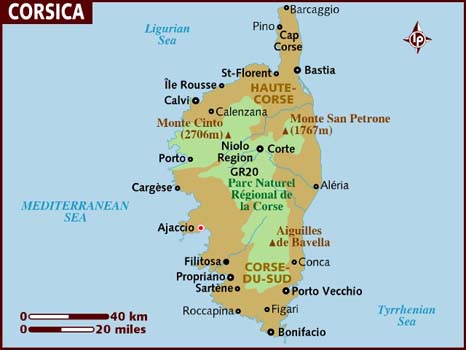 CORTE ~ The ancient political and cultural capital of Corsica. LIz meets the Professor and the Scafanis. Place Gaffori becomes the site of a defiant FLNC funeral.

NIOLO REGION ~ Liz first fears she may have mazzeri blood in the village of Calacuccia where the Professor lives. Remote village where the signadora practiced her arts and a strange Indochine villa appears out of nowhere. House with the oblique staircase, a suspected separatist stronghold.

BONIFACIO ~ Liz pays homage to her ancestors at cemetery. Chase along the chalk cliffs leads to climactic battle scene near village of Zonza not far away.