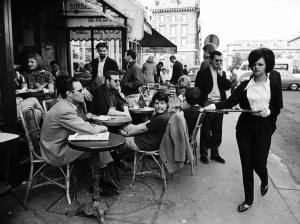 My first trip to France in 1963 as an impetuous nineteen year old is documented elsewhere. I did take a brief swing through Paris, having found a Parisian taxi driver willing to help me track down my parents, gratis, to join them for the ride home on the QE II. We dined at the Cochon d’Or (I still have the little gold pig I received there), attended the Folies Bergère, and took a very fast narrated cab ride past all the requisite sights.

But having had my Francophile button pushed, when my daughter was five, I took her to French lessons. She drew a picture that year of the Tour Eiffel, saying how she wanted to go there when she grew up. And so she did, living in France for two separate years after college. And, of course, being a doting mother, I needed to visit often to see how she was doing. Below is a list of those visits and other trips taken with friends. Now thirty-something, my daughter sends her own daughter to a French for Fun preschool run by that same teacher. My granddaughters hear only French spoken at home (Dad gets by with English!) and are becoming as fluent in the language as their Mom. I, on the other hand, having studied French forever in school never became fluent in the spoken word, although I can do a passable job reading French.

Here is my list of trips to France which began in 1999.

#1 – My daughter and I stay in three different chateaux and visit most of the rest in the Loire valley. My first experience driving in Paris.

My first $400 gastronomic meal at Le Prieuré in Saumur. Delighted to discover my daughter had become an expert in French cooking.

#2 – On the next visit, after a visit in her suburban Paris home, we head to PIcardy to visit friends and on to Normandy, Omaha Beach, the American Cemetery, and an outdoor son et lumiere spectacle. Then on to Quimper (visiting the factor where my favorite china is produced) and eating the best foie gras we ever tasted.

#3 – I invite my best friend from childhood and we do Paris, staying at a friend’s apartment in the Marais, then head south to Avignon and many other stops in Provence and the Cote d’Azur. My first visit to Logis du Guetteur in Les Arc sur Argens.

#4 – Back with my daughter, we head east from Paris and do the Champagne country, the medieval city of Troyes and the amazing 28 km of underground Moet and Chandon cellars.

#5 – The only and only group tour with a gal friend found us shivering in the coldest winter ever seen on the Cote d’Azur and walking back from the Opera Garnier in Paris. with frozen toes.

#6 – My second trip to Corsica (this one slightly more sane!) and then back to mainland France with the delightful addition of my daughter’s brand new boyfriend who joined us in Cannes at the last minute (and became my son-in-law a year later).

#7 – A year after the wedding, my son-in-law’s mother joins us for a stay in Paris in the shadow of Notre Dame and a trip to Provence and Dordogne.

#8 – A three-week opportunity to show another friend all my favorite Paris restaurants, chateaux, and Normandy as well.

#9 – Summer of 2013, the first three generation trip as my two toddler granddaughters travel with their mother to a village south of Paris. Then I catch up with the gang and drive to Strasbourg (with the girls my daughter tutors back at home and their grandmother, giving up an immersion experience in French/African culture), and then on by TGV to a month’s stay in a home exchange near Aix. My French-speaking three-year-old granddaughter attends French summer program 10 hours a day for 3 weeks while my daughter and other granddaughter sightsee.