The backstory for the character of “Charlie Pederson” is loosely based on my life, Karen Ann Veazie, LJHS Class of 1961. The character of “Marietta” was based on my best friend Mary Louise Ypma. The fictional friends on the Greyhound Bus were based on Laureen Gray and Laurel Gonzalves. The entirely fictional current day story in the novel is partially set in La Jolla. 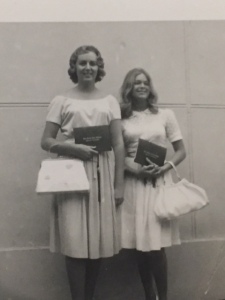 Marietta and I were on the cusp, so to speak, graduating from high school in 1961.
We entered puberty in 1955 along with a generation of kids who spent their formative years crouched in dirty hallways, sweaty fingers laced behind their well-scrubbed necks, waiting for the A-bomb. We graduated at the peak of the SAT scores. Our parents were afraid of Sputniks, and we were afraid of our parents. There were rumors about poodle skirts, but I never laid eyes on one.

I was completely out of kilter with my own generation. My mother insisted I wear sturdy brown oxfords instead of the saddle shoes and Capezios that graced the dainty feet of my peers. Of course, irradiating my toes under the shoe store fluoroscope negated the health benefit of good arch support.

Actually, looking at the bare bones in my feet was the closest I ever got to obscenity.
My political consciousness peaked at having two parakeets named “Ike” and a German shepherd with the same patriotic appellation. My family was not big on original thought.
I saw myself as a divorced kid—divorce being more of a social disease than a fact of life in those days. My mother was a Supermom before they coined the term, and Superman was still flying around our small, round television screen in his black and white underwear. Three things made my toes curl and my soul reverberate—the handsome, blonde Crockett brothers next door, listening to the Great Pretender over the P.A. at lunchtime, and falling in love with Elvis via my blue and white hi-fi.

My friends and I were one step removed from the dork category. We were the girls who never won an election, never got picked for cheerleading, and remained eternally dateless while racking up good grades and syrupy praise from adults—neither very useful in the popularity polls.

The only thing that carried us through the last two years of high school was the Reject Club, conceived on a dreary bus-ride home from a tour of a prospective college campus.
Marietta and I had stood side by side with our two friends, Pat and Cindy, staring at the empty train track.
“I told you it left at four-thirty, Charlie,” said Cindy.
“I thought we had plenty of time.”
“So what do we do now?” asked Pat.
“Come on.”

I led the way to the information booth and found out where we could catch a bus from Los Angeles back to San Diego. An hour later the four of us were crammed hip to hip in the back seat of a Greyhound bus.
“I can’t believe we missed the train. We belong in some kind of reject club.”
“Oh, Pat, shut up. As long as we get home,” said Cindy.
“Come on, everybody, let’s sing some songs.” I launched into one of our favorite by the Everly Brothers.

Our four voices formed an enthusiastic, if only slightly off-key blend. Whenever I want you, all I have to do is dream. Dream, dream, dream.

In the middle of the second stanza, an old geezer dozing in the seat in front of us let out a loud snort, setting off paroxysms of hysterical laughter that soon had us doubled over, tears streaming down our faces.

So, line after line, we chimed in and composed our fight song, sung to the tune of a popular college fight song. Verse one was finished by the time we reached Carlsbad, the halfway point where buses made their rest stops.

We are the Rejects; we are the Clods,
We are rejected by all the gods.
We are known both far and wide
For our dejected, warp-ed pride.

We never win, we never excel,
We strive for heaven, but only get hell.
That is why we suffer so,
That R.C.s can reach their highest low.

The entire next week we exchanged scribbled notes in class, completing the second stanza during fourth-period Honors English, under the disapproving eye of Mrs. Becker.

Procul, O procul, esti profani,
That is our motto and it ain’t funny.
Do as Waldo said to us,
“Hitch up your wagon to a bus.”

Onward to failure, onward to shame,
We are the martyrs who lose for our name,
“R” for Rejects, Clods for “C”,
Refuse and Roy…al…ty!

Ralph Waldo Emerson merited his spot in the song by being the poet of the month. The bus came from our club’s origins, and the motto—translated, Far off, O far off, ye profane ones—was appropriated from Miss Shade’s Latin class.

The next weekend, on a sleepover at Pat’s house, we lined up on the floor like pigs-in-a-blanket and compared notes to make sure everyone was still eligible for the club.
The club was born of adversity; of not fitting in when fitting in was all that mattered. Success on any front, except for academics, put your membership at risk.
“If weirdo Nick asks you out, Mare, you’re out,” teased Cindy.
“Hey, you just got picked to work on the yearbook,” said Marietta.
“Just to take photos. Remember, I lost the election for class treasurer.”
“Yeah, but you got nominated,” I added.

We debated the merits, or rather failures, of each of us well into the wee hours of the morning. Eerie music from the late night show Inner Sanctum accompanied our whispering.

The camaraderie of the club carried us through the rest of high school. Nary a homecoming princess among us and scarcely a member with an honest date to the Senior Prom. My date, bribed into escorting me, was the older brother of a classmate I barely knew. My grim-lipped consort limited himself to one dance and driving my mother’s Olds—loaned for the occasion.

A couple of decades later, I got some mileage out of my date when a woman friend told me he played a handsome doctor on a popular soap.
“Oh, my God,” she said. “You actually danced with him?”
I acknowledged that I had indeed, but I privately wished that he had been a better actor and at least pretended to enjoy the evening.

Every Friday night Marietta and I would jump into my Morris Minor and head off to the Cove Theater to catch the latest release and munch on buttered popcorn and Red-Hots. After the movie, we’d cruise on down to Oscar’s, the quintessential drive-in restaurant complete with carhops on roller skates. Our only foray into juvenile delinquency came when we responded to slow service by dumping a tray of empty root beer mugs and plastic burger baskets off the side of the car and speeding off to make our ten o’clock curfew.
We spent summers at the beach, embalmed with carcinogenic baby oil and iodine.

Fantasies about the lifeguards went unfulfilled. These macho men of the sands hit on the more popular girls. The surfers were also out of our league. These early boarders spent all their waking hours hanging ten and creating a mystique that would become the subject of a famous Beach Boys’ tune.

Occasionally we would attract a couple of Marines from Camp Pendleton, easily identified by their black shoes, black socks and T-shirt tans.

On one memorable occasion, we invited two of them up to my house for dinner and dancing on the patio. Midway through the evening, my mother was called away to tend to an emergency involving my brother and the police. With no supervision, the Marines found the Johnny Mathis tunes a bit too much of an aphrodisiac. Marietta and I fled to a neighbor’s house for help when the young men’s hands started moving up under our blouses.

We had two other sources for male attention. One was the local military academy, where they invented dirty dancing in the still of the night. I scrupulously heeded the warnings to watch out for their belt buckles on the slow dances.

Then there were the Sunday afternoon dances at the Naval Hospital in Balboa Park.
“Now, ladies,” the chaperone instructed, as the gray navy bus lurched over potholes on the way to the hospital, “you are not to give out your last names or your phone numbers.”
“So, are they wounded or something?” Marietta asked.
“No, they’re crazy,” the young woman behind us whispered.
Marietta and I looked at each other in shock. Our jaws dropped even farther upon our arrival at the mess hall, where we found the young men, with whom we were to dance, dressed in blue bathrobes and pajamas. But within minutes, we were spinning around the room with the demented sailors, who were lined up three deep to take their turn.
They may have been locked up and out of it but at least we were in demand.

The closest I got to a sexual experience was driving a friend’s father’s hot cars. I practically peed in my pants when I let out the clutch on his Morgan. Later, downshifting and accelerating around the curves of a precipitous grade north of town in his ‘53 bronzed Porsche, his hand seductively stroked my thigh. “Do you dig it, Charlie?” he asked.
I didn’t know if he meant the car or his hand on my leg, but both were exhilarating.
“Far out,” I answered.
“You know, Charlie, you’re the only chick I’ve ever let get behind the wheel of my car.” A great lie, even with the chauvinism.

He and his wife were a refreshing dip into decadence and away from the white-gloved upbringing that I and my friends had known. They were from the East Coast—real class and lost millions. They introduced us to booze, Charlie Parker, and the occult—which to Marietta and me was anything other than white, Anglo-Saxon, and Presbyterian.

Simpler times. Safer times. But too many dreams.