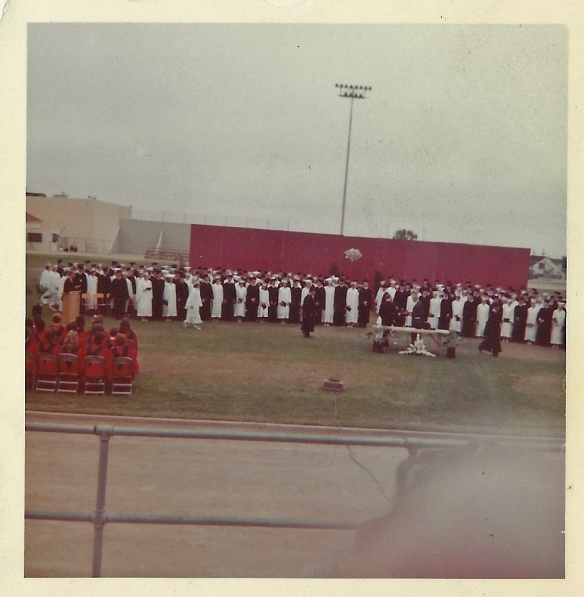 There were four speakers on the topic of Self-Respect in Family Living, Religion, Community Activities, and Education. I tackled the Religion topic, having been raised in the La Jolla Presbyterian Church. With my values of today, of course, I would have presented it more from a point of view that embraced all religions and faiths.

The life of this age has grown past the religion of churches.  Salvation is now to be found in another direction.  These are startling statements, but they guide the lives of many of the young people here.  Sin no longer has to be conquered; it is merely a more interesting form of life.  Morals have become identified with what the most timid members of society consider proper behavior.  Religion is dismissed as an illusion, a matter of secondary importance, a hindrance to what they feel they should gain from life.

Religion, actually, is a vital part of our lives today.  Where can we go to escape the fact that there is a God?  As we explore the heights and depths of the earth, we find things that are too vast or too small for us to explain.  As we answer questions, we uncover more questions.  The limits of the human mind have been reached and the divine enters into our lives.

Religion is not something that comes easily.  As much as any scientific experiment, it needs to be worked over with knowledge, care, understanding, and attention to detail.  Some search for fallacies in religion, but they can never seriously challenge the faith of an honest and informed believer.  If religion is an illusion, it must be an illusion on a level far more profound than that to which human experience normally probes.

We have been searching today for the meaning and importance of self-respect in our lives.  We might be led to believe that man is an end within himself, that he must only develop a way of life that satisfies his own conscience.  Should the focus of attention be on man’s conscience or God’s will?  Remembering that self-respect is a device to meet the demands of religion, we can transfer the focus from Man to God.  Man alone succumbs to self-obsession, but with true self-respect, he can find a higher meaning in life.

We go through the daily rounds of our lives with mixed feelings about the moral aspects of what we are doing.  When doubts arise, we want to dismiss them as the claims of a religion that comes from a remote and alien era, not realistic enough for modern living.  We tend to fall back on the old clichés, “If you’re good, you’ll be happy…but you’ll miss a lot of the fun,” and “everybody does it!”  Rationalization can twist self-respect so much that we can respect ourselves for doing something that is utterly wrong.  But self-respect integrated with religion cannot be changed.  The foundations for judgment cannot be altered.  No person will know if we have twisted self-respect to fit our own needs, but God will know.  Thus self-respect, naked and by itself, cannot exist.  It must be clothed in the bonds of a strong religious faith.

In our young lives, we are groping and longing not only for an education and security but for meaning in our lives.  As my fellow classmates have emphasized, we are struggling to gain self-respect, the feeling of being an individual, a being with a mind and an inner freedom and personal value.  Through continued interest in our home, community, school, and church, we will be inspired to build a stronger personal faith in our democracy and our God.

Each member of the graduating class must believe that he has his own niche to fill, his own particular task to perform, and that God can make more use of him on his feet than on his face.

“Strive earnestly to present yourself unto God, tested and proved worthy by trial, a workman unashamed, ever cutting a straight path for the message of truth.”  These words of Paul written to Timothy nearly 2000 years ago were written for all men and women and have special meaning today as we pay our tribute to the class of 1961.  Finis forever.