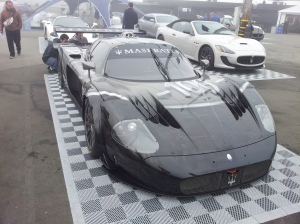 The Maserati Alfieri Concept car in the early morning fog

A great time at the 2014 Rolex Motorsports Reunion at Laguna Seca. Drove down from the Bay Area at the crack of dawn to get a good parking space. I was delayed by a big spill of tomatoes on the freeway but because the track was fogged in still arrived in time for the first race run. Found a very wet seat in my favorite stands by Turn 4. By 10 am the seats and the track had dried out. Enjoyed taking a little Track Taxi (run by Veterans to raise funds for Wounded Vets) up to top of the track where you can see a view of the entire track off one side of the hill and see the race cars zoom through the corkscrew turn on the other. The Mark this year was Maserati and it was great to see both the classic versions and this stunning new Alfieri Concept.

After the race maintenance

Under heavy fog Group 3B Can-Am comes out to play including Craig Bennett in his 1974 Shadow DN4 (scroll down through the photos on this Sports Car Digest article). On the left is a photo I took after the race with the chassis exposed for some repair work. I’d also seen this car up at Sonoma last spring. Great to watch it pull away from the rest of field here at Laguna Seca.

So much fun watching classic race cars zoom through the corkscrew at the top of the hill on a pace lap.

My friends weren’t able to make it, but never fear, I met a really great guy. Big and fluffy! And hel’ll never give me any back talk!

Look this one up to see the sponsor!! 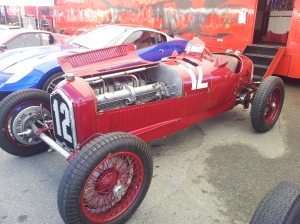 Read all about this Alfa in the photo below 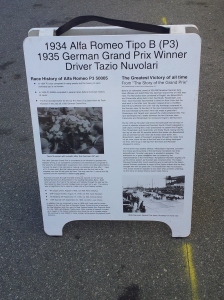 I hit the road in the early afternoon in order to stop at my favorite restaurant in Willow Glen.

But look what I missed by leaving early!  Right in front of the stands where I had been sitting. A wheel flying into the stands.