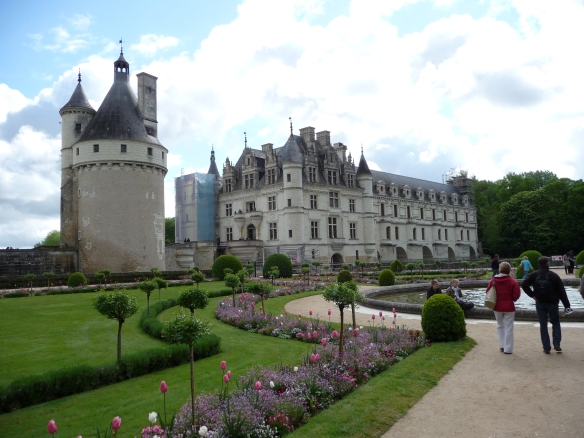 I have visited Chenonceau three times. The first time with my daughter in the dead of winter. I was doing my motherly “duty” and visiting her during her first year of living abroad in France. The program that was to help her find a job didn’t work out and she was on her own, finding both friends and employment. We spent over a week staying in three different chateaux and visiting many of the rest.

But Chenonceau always stuck in my mind with its graceful arched bridge spanning the River Cher. It was commissioned by Diane de Poitiers, the mistress of Henry II in 1555 who also oversaw the planting of extensive flower and vegetable gardens. Set along the banks of the river, but buttressed from flooding by stone terraces, the exquisite gardens were laid out in four triangles.

After King Henry II died in 1559, his strong-willed widow Catherine de’Medici and forced Diane to exchange it for the Château Chaumont and made Chenonceau her own favorite residence, adding a new series of gardens. Only is France will women complete over the same man with dueling gardens!