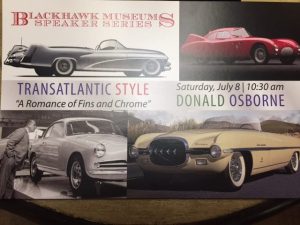 So enjoyed the lecture today at Blackhawk Museum by Donald Osborne, author, classic car historian, regular on Jay Leno’s Garage television program, appraiser, consultant and even opera singer! A video of exactly how they positioned all of the cars in the Museum for the exhibition is a must watch.

He was touting his stunning new book Transatlantic Style/ Stile Transatlantico  which beautifully illustrates the exchange between Italian and American car designers from the end of World War II until 1960.

But the most fun was when an audience member asked what he drives every day. He reported that he just bought a 2017 Alfa Romeo Guilia Ti 2 weeks ago and has already put 2300 miles on it. So last month I took a test drive of this very car! So this is what he wrote when he signed his card for me. And I quote: Grandma deserves a Guilia Ti!! 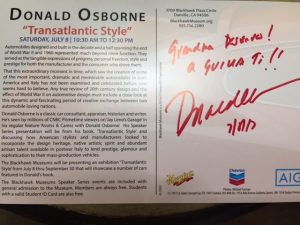 The expert has spoken! It’s a sign! As soon as my ship comes in, I’m going to buy mine!