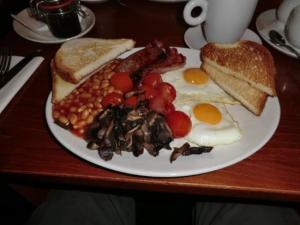 I’m just returning from the land of the living dead this morning and trying to remember what it is like to have an appetite after several days of languishing prostrate on the couch and slurping down pomegranate and cherry flavored jello from small plastic containers. Fantasies of real food chunk-full of calories and flavor flit through my mind, although we’re still at the wishing stage here. What comes to mind, should I ever be fit enough to lift a spoon to my parched lips, is a full English breakfast. The traditional fare, includes bacon, poached or fried eggs, fried or grilled tomatoes, fried mushrooms, fried bread with butter, sausages and baked beans, usually served with a mug of tea. As nearly everything is fried in this meal, it is commonly called a “fry-up” or in medical terms, a cholesterol sudden-death killer.

I have fond memories of my traveling companion bellying up to the bar at the famous Albert Pub on Victoria Street in London, many hours before a pint of ale would be appropriate even in the furthest stretch of one’s imagination, and ordering two such overfilled plates. 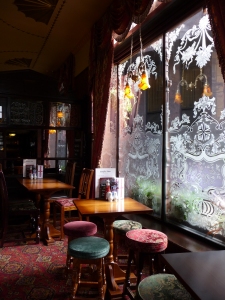 The Albert is a beautiful Victorian pub was built between 1845 and 1852 and was originally known as ‘The Blue Coat Boy’. It was later renamed the Albert in honor of Queen Victoria’s husband, the Prince Consort. The celebrated carvery restaurant is known to have been frequented by British Royalty, Cabinet Ministers, and Parliamentarians of note. Surviving the Blitz, it stands in its original splendor, boasting original hand-etched glass windows and ornate ceilings, captured so beautifully in this photograph taken from our table. 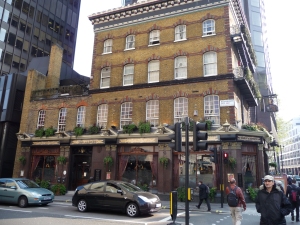 All right, enough of this. I’m not going to make it to London this morning. And my, well technically my daughter’s cat, Shadow, is rubbing up against my calf, meowing vociferously, and begging me to throw on some clothes, drag myself to the store, and get him some cat food. Maybe I’ll find something to fry for my breakfast.