SETTING: Liz arrives at a news conference and watches Professor Sylvia Nicoli narrate an old film clip. The character of the Professor is based on Dororthy Carrington. 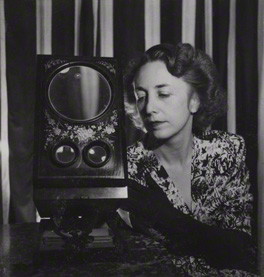 My hopes brightened. I turned my attention to the screen. Projected in grainy black and white, a very young Sylvia Nicoli, nearly swallowed up by a dark, broad-shouldered Forties-style suit, walk up a deserted country road.

The Professor launched into her narration. “I remember there was a dry sirocco wind that day, kicking up swirls of dust all the way along our three-kilometer journey. I worried that my photographer, who shared none of my enthusiasm for the occult, might change his mind and leave me stranded.”

I felt a slight chill go up my spine as the next scene revealed a string of bleak stone houses in a sparsely settled hamlet. The Professor continued. “The inhabitants were nowhere to be seen when we arrived. I knew the men were most likely tending their sheep on the high plateaus. But the women? Were they hiding from me, a stranger in urban dress accompanied by a man holding this strange, whirring machine, or had they caught a glimpse of the solitary figure that approached us?”

I let out an involuntary gasp as a scarecrow of a woman popped onto the screen, her black rags being whipped to and fro by the wind. “My photographer was so stunned by the woman that he couldn’t hold the camera still,” the Professor recollected.

The next shot jerkily panned down to the mazzera’s legs. “When I came closer, we saw barely-dried trickles of blood on her stick-thin legs, a gruesome reminder of her recent trek through the barbed maquis.”

The Professor turned her back on her audience and gazed at the screen. “I still marvel at her ageless spirit. I was at least in my seventies at the time. Now at the same age, I have long since lost the spring in my step.”

I scanned the row of faces next to me. Was the audience buying into this crap? Every eye, eerily illuminated by reflected light from the screen, opened wide as the film shifted to a close up of the mazzera’s face. The woman’s deep-sunken eyes blazed out from under her bandana. “She looked through us not at us as she fingered the gold decoration that dangled between her eyes. Its purpose, I told us, was to ward off evil spells. She said she had to protect her eyes.” 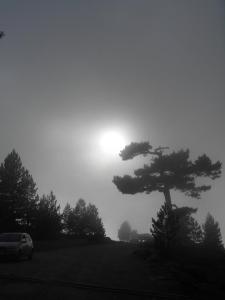 I thought back through the couple of articles Juliette had given me to read on the plane. I didn’t recall anything in particular about eyes. Was there some connection between their sight and their presumed ability to bilocate, this ridiculous business about assuming the form of an animal and going out on dream hunts at night, and, at the same time, being fast asleep in their beds? Of course, when they did kill their prey, they would need to see the faces of the living—a neighbor or villager or even a relative—on the heads of the dead dream-animals. The zinger was that they were then compelled to announce to that person that they would die within the year. Couldn’t have made them very popular.

My full attention was brought abruptly back to the screen as the mazzera thrust out a bony finger at arm’s length. I took a sharp breath as the camera shot dipped to the ground and then panned up to some far hills dotted with oaks and chestnut trees as the Professor went on. “The mazzera said, ‘It happens that I go out at night. I tear my flesh and clothes. The need to hunt is stronger than I. The blood wills it so.’”

As I watched and listened, I felt a bit less inclined to believe that the film itself was a hoax. Its final frames captured the mazzera striding away, back to the maquis. “What it does not show,” said the Professor, her voice cracking, “was a foolhardy thirty-year-old version of myself abandoning my photographer and sprinting after the apparition. I’ll never forget the stench of death that stopped me in my tracks, a stink that not even the maquis, with its sweet aroma of rosemary, thyme, and immortelle, could mask.”

The lights came up. I tucked a few stray strands of hair under my braid and checked the status of my duffle bag. Assured that all was in place, I turned my attention back to the Professor and readied myself to ask questions and take notes.

Instead of the big announcement, the Professor’s voice, now melodic as a shepherd’s pipe, floated out over the audience with more ramblings about the mazzera. “What struck me most about this woman was her sense of nobility. She was so enslaved to her calling that she was willing to suffer social exclusion, even physical maltreatment at the hands of the villagers. If she had believed that she was possessed by some kind of evil power, she could have sought exorcism. But, no, she felt her dream-hunting was ordained by God, a Christian God, to whom she owed obeisance.”

Then the Professor set aside her notes and began to relate a more personal story. “My photographer and I learned later from the villagers that she had nearly been killed the year before we arrived after prophesying that two coffins would leave the same house within one week. When two brothers died of the Spanish flu almost simultaneously, their relatives dragged her to a nearby stream and tried to drown her. Only her incredible strength and agility allowed her to escape.” No wonder they hid behind closed doors. The Professor’s story could hardly be confirmed or denied. Any witnesses would be long dead.

The reporter, who had taken a seat in the front row, shouted out a question, obviously as impatient as me. “Professor, you announced you had a recent find in addition to the film? Can you tell us about that? Are there people still claiming to be mazzeri today?”

The Professor rose up on her toes to bring her mouth nearer to the microphone. “The answer is yes. But not just claiming the distinction. Those with less than stable minds have always claimed they had the power to foretell death. No, I have found evidence, which I intend to document, of one male mazzere and at least two female mazzera still practicing their—”

Another man’s voice bellowed out behind me, cutting the Professor off. “What proof can you give us?”

The Professor’s voice turned tremulous. “I am currently seeking funding for an investigation to be—”

The same voice, louder and more agitated, drowned her out. “You expect the Corsican people to provide funds for this hogwash. We have more important issues to deal with. We are waging a war for independence. Several hundred voices are being raised outside these doors at this very moment. While we sit listening to fairytales, they are out marching in solidarity for self-determination for all of us.”

An even deeper male voice boomed out from the aisle. “You underestimate the importance of the Professor’s work. She is a true heroine, as much as any bearer of the Moor’s head. For decades, she has been dedicated to the preservation of our history and culture.”